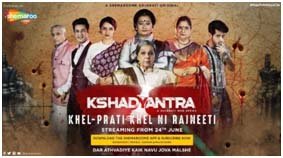 After the successful release of web series,VaatVaat Ma, first Gujarati digital film Swagatam, Jok Samrat, Unknown to Known and many more, the platform is all set to launch its next political thriller web series

In a span of less than 2 months, ShemarooMe has already released 9 titles and has left no stone unturned to entertain audiences

Ahmedabad (Gujarat) [India], June 16: Premium Gujarati OTT platform ShemarooMe today announced the launch of trailer of Gujarati web series ‘Kshadyantra’. This political thriller web series does not only a strong star cast but a very different approach to the typical political drama. RohiniHattangadi, Vandana Pathak, Apara Mehta, Vishal Gandhi, Shrenu Parikh, Deepak Gheewala, ParikshittTamalia, AnuraagPrapanna and Feroz Bhagathave all played some crucial characters that have added some new dimensions to the show. Story and dialogues written by Babul Bhavsar. ShemarooMe has been a platform that has had the most entertaining offerings across various genres and categories and Kshadyantra will definitely add yet another feather to its cap.

Kshadyantra, a political thriller Apara Mehta plays the character of Pannaben, who has been a successful CM for the past 15 years and is on the road to become the new PM of the country. The path to victory is not always easy and the plot also showcases many twists and turns. This scintillating tale of misery is what makes Kshadyantra a high impact political drama which will surely keep the audiences at the edge of their seats

Commenting on the launch announcement of the show, Urvish Parikh, Director of Kshayantra said, “Kshadyantra was the first Gujarati web series ever to have such an impactful and experienced star cast.  It was an enriching experience to shoot the entire web series with such multi starer cast. I am glad that we could manage the complete shoot during the difficult time of COVID 19. Also we are extremely excited that the series is releasing on 24th June on ShemarooME to entertain our Gujarati audiences

Commenting on her role, Rohini Hattangadi said, “ I am excited to be a part of Kshadyantra and also super happy that ShemarooMe decided to give this gem to the Gujarati film industry. I have played various roles in my career, but Vasantiben will be very close to my heart. Though we were working on a web series, the scale was so big it felt like working in a movie. I am sure my viewers will enjoy the show and live the moments with us.”

Adding to the same, Apara Mehta said, “I am glad to be a part of a Kshyantra, the twisted tale of this political thriller is as good as watching a movie and I am excited to finally be a part of a web series. Pannaben’s character will surely get every viewer enticed and get hooked onto the plot. Catch the show on ShemarooMe Gujarati from 24th June.”

Vandana Pathak who also plays a crucial role in the series added,”This is my second project with ShemarooMe and I couldn’t have asked for a better one, Kshayantrahas a very intriguing concept and deals in big issues, the way the plot and characters have been handled is beautiful to see. The audiences will enjoy this marathon run and will love every character. I can’t wait to see the series with my family on ShemarooMe from the 24th of June.”

Deepak Gheewala added, ‘Kshayantra has been a very ambitious project and I couldn’t have been happier to be a part of this family. I have had the privilege to share the screen space with some of the most talented actors and I am glad Shemaroo choose me for the role. The show goes on air from the 24th June on ShemarooMe and I have planned to watch it in one go.”

Shrenu Parikh added, ’This is my first Gujarati web-series and I couldn’t be more excited to work with Shemaroo Entertainment. Kshadyantra has been a very ambitious project and I have had the privilege to share my screen space with legends. Have learnt a lot from all of them. I am sure the audiences will enjoy the show and have a very interesting time binging the same. Don’t forget to catch the Kshadyantra team on ShemarooMe from 24th June.”

ShemarooMe is the over-the-top (OTT) video streaming app of Shemaroo Entertainment Limited, India’s leading content powerhouse. Over 57 years of being in the media and entertainment industry, Shemaroo has now evolved to be a significant player in the digital ecosystem. ShemarooMe is a comprehensive app with a diverse and exclusive content offering for an audience looking for Bollywood, Gujarati, Marathi, Devotion, Punjabi, Comedy and Kids categories. ShemarooMe also has a unique offering under Bollywood Premiere – the platform showcases World Digital Premiere of critically acclaimed Bollywood movie every Friday. ShemarooMe gives consumers the freedom to choose subscriptions from various content categories. ShemarooMe enjoys a wide acceptance in India and was recently launched in the US market along with the South East, Middle East Asia, UK and other Indian diaspora markets. Currently ShemarooMe is available across geographies, with its presence in 150 countries where consumers can download and experience the promise of endless entertainment delivered at the comfort of their homes. Consumers can download the ShemarooMe OTT app from Google Play, iOS App store and http://shemaroome.com/. ShemarooMe is also available for audiences to subscribe on Apple TV, Amazon Fire TV stick, Cloud walker TV, Mi TV, Roku amongst various other platforms. 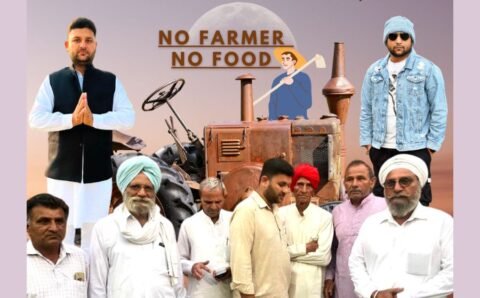