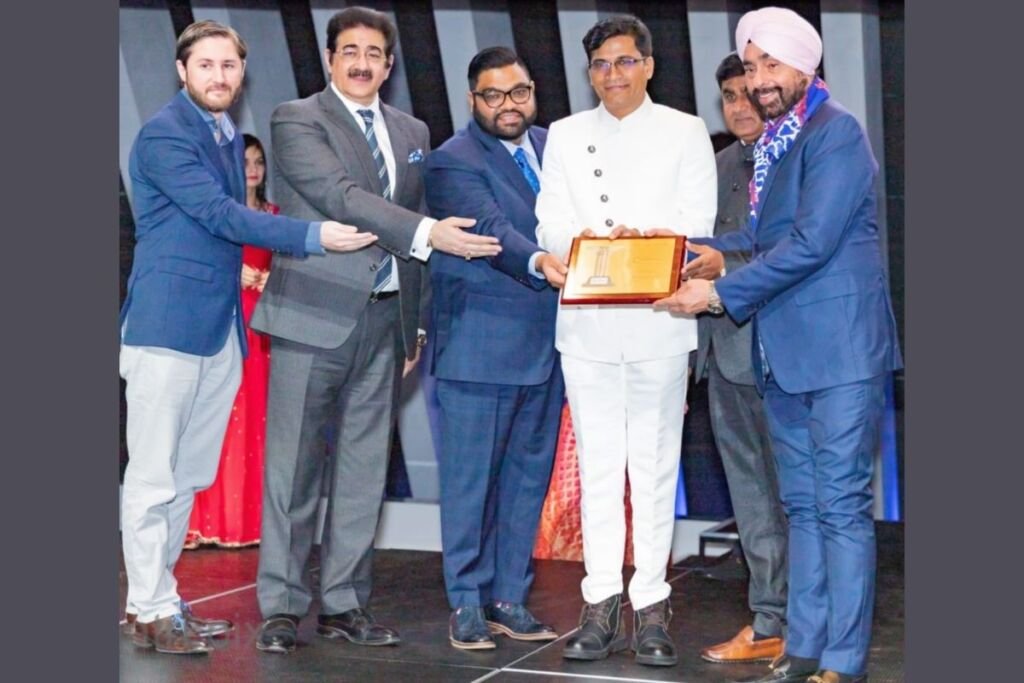 November 24: “Bharat Mahotsav” – highly esteemed Festival of One India, organised from 20th – 24th November 2021in Zurich (Switzerland) honoured Spiritual Guru and social reformist His Holiness Gurumauli with the most coveted Bharat Gaurav Samman by Confluence – Make in India NGO. The award was given by Mr Sandeep Marwah, National Chairman, Media and Entertainment Committee BIS, Ministry of Consumer Affairs Food and Public Distribution, Government of India and Chancellor AAFT University of Media and Arts and Mr Govind Savale, President Indo Swiss Centre. The program was affiliated with the Ministry of Culture and External Affairs of India. The award is also given to prominent personalities from various fields of India.

After celebrating the Mahotsav in London (UK), 2018 & 2019, Dubai (UAE) 2020, Varanasi (India) 2021, the chosen venue for this year “Bharat Mahotsav” Festival of One India is Zurich (Switzerland), with the theme being “Celebrating 75 years of Indian Independence”. The occasion will not only promote Indian Fashion, Handloom & Tribal Products, Tourism, Culture & Trade, women Empowerment but will felicitate people with excellence in their respective fields.

The reputed award is being conferred to His Holiness Gurumauli, Spiritual Head of Akhil Bhartiya Shree Swami Samarth Gurupeeth, Trimbakeshwar, Nashik, Maharashtra, for his matchless contribution to the grassroots level Social Reforms for Masses in different streams with its healthy, positive and life-changing impact on humanity across the globe.

The Akhil Bharatiya Shree Swami Samarth Gurupeeth, Trimbakeshwar, is a charity trust founded by His Holiness Gurumauli to provide a platform for a healthy, joyful, and peaceful life to the world.

The social reformer and visionary aim to offer a platform for imbibing Vedic knowledge streams (vidya) and skills (Kala) to the spiritual seekers and to conduct research and spread awareness about Indian cultural values. He has been relentlessly working on grassroots social changes in India and now in other areas of the world.

For the past several decades, the saint has worked to improve the lives of the poorest of the poor, equipping them with information and training, empowering them to become self-sufficient, and, in the process, forging out a strong village and agrarian economy based on communal peace and harmony. In addition, the charity has an exclusive team of trained volunteers to conduct Value Education and Youth Empowerment seminars in schools and colleges to raise awareness of rich heritage among the youth and provide environmental conservation counsel. The outcome is the result of this education and training, which the trust imparts, is overwhelming.

The reformer has inspired millions globally to quit drinking and drugs. The followers are encouraged to found good jobs or to be self-employed. Even the women are running small and medium-sized businesses, and farmers are using both traditional and modern agricultural techniques and tools to increase yield because of the above-mentioned reforms and training that is free of cost. Also, the Seva Marg conducts successful seminars and programmes of no-dowry mass community marriages, agro empowerment, communal harmony, self-employment for the youth, and so on, which have now spread across the globe through the trust’s thousands of social service centres.

The counselling sessions, which are available at over 5000 Seva Marg centres worldwide, take into account the troubled and dissatisfied solution seeker’s social, educational, and ancestral background and recommend basic, easy-to-do self-help approaches.

His Holiness Gurumauli’s relentless and selfless work has been duly recognised internationally as well as globally. He has been felicitated with many well-known honours and citations for his matchless contribution in the fields of welfare and Vedic knowledge, spiritual awareness, meditation techniques, healthcare, agriculture, youth and woman empowerment, and feeding the poor. The latest in the list is honour bestowed to him by the World Book of Records, London, last month. Before this, in 2019, the spiritual guru was awarded by the Indian Institute of Education Management with ‘Bharat Seva Ratna’ award and the ‘Vijay Ratna Gold Medal’ for outstanding Social Service in India. The Maharashtra government in 2014 recognised him with the ‘Krushi Bhushan award’ for his remarkable contribution to farmers. On the occasion of Rajiv Gandhi Akshay Urja Din – 2007, he was awarded for meritorious efforts in the field of Non-Conventional Energy.

During the Kargil War in 2006, thousands of volunteers donated blood for the national cause from camps arranged by him, earning him a special award from the Maharashtra Government. Nasik Collector and District Magistrate lauded and awarded a letter of appreciation for contributions made during the water scarcity management programme. He was also awarded the ‘Malhari Ratna’ by Jejuri Sansthan for his tireless efforts on behalf of the ordinary man, among other things.

With the constant guidance and blessings of His Holiness Gurumauli, the Eighteen- Point Social Reform Program focusses on Value Education and Moral Values for children and youth, Counselling Cells, Guidance on natural way to Farming, Health through Ayurveda, Scientific Research of the “Vedas”, Marriages without dowry, Training Programs for Volunteers, Indian Culture, Guidance on Law, “Vastu-shastra”, Women Empowerment, Self-employment etc. The Programs have helped in the creation of a more sensitive, tolerant, happy and overall positive and inspiring community both in India as well as abroad. His Holiness Gurumauli achieves this mammoth task of serving millions of people through lakhs of volunteers of the Seva Marg.

Millions of people around the world are living healthy, happy, and tranquil lives because of His Holiness Gurumauli’s grace. His work has touched the lives of millions of individuals all around the world, transcending race, nationality, and religion.